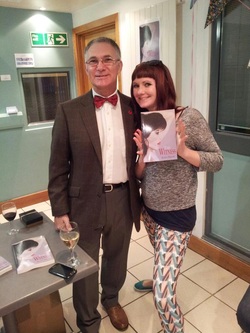 Kevin and his daughter Lydia

BIOGRAPHY
Kevin spent his childhood growing up in Canterbury, Kent.  From an early age he became interested in history which plays an important role in his novels.  He loves nothing more than to visit castles, churches and important houses.
When he left school, Kevin attended the Technical College, (now Canterbury college), as an apprentice sheet metal worker.  During his five years of training he worked for a small company with his father and brother.  He went on to own his own business in fabrication and welding.
In 1981 he married his wife Maria and they moved to Whitstable, his fathers home town.

​             "Whitstable is a lovely seaside town.  I loved walking along the seafront and visiting the harbour to see the little fishing boats and barges there."

After owning his own business, Kevin trained as a teacher and worked in further education teaching fabrication and welding, whilst writing novels and painting in his spare time.  During teacher training in the late 1990s he taught creative writing to adults.

"This was the scariest thing I had ever done.  Standing up in front of a class was my worst nightmare, but I wanted to conquer my fears.  Some of my memories from this time are not my best!"

In January 2015 Kevin and Maria decided to move from the house they had owned in Whitstable for twenty seven years.

“It was a very difficult decision to make after living here for so long, but we both came to the conclusion that if we did not move now then we never would.”

They now live in a beautiful little village hidden in the Kent countryside where they enjoy rural views over the North Downs.

“It’s so peaceful here, a wonderful place to write books.”

In January 2016, Kevin gave up full time employment to spend more time enjoying his surroundings and concentrate on writing books.

"The Witness is a psychological thriller and deals with some very harrowing issues."

The Cellist, published in 2017 is the second thriller in a series of books that share characters.  Some of the characters from The Witness appear in this book.  These are designed to be standalone novels but of course it would help if they were read in series.  My third thriller, featuring characters from both The Witness and The Cellist is now at the editing stage and should be ready for publishing later this year.