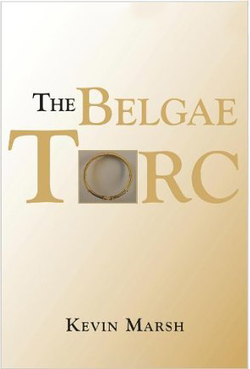 'The Belgae Torc’ took nine months to write and was my first attempt at disciplined writing.  Most of this book was written at the end of the working day which isn’t ideal as my most productive time is between 6am and midday.  The words I produce each evening are edited and knocked into shape at weekends when I can work during my most artistic phase.

With ‘The Belgae Torc’, I had a plot in mind so I was able to focus my research and bring my characters to life.  The beginning or Part 1 is set in the Iron Age.  I pretty much knew what was going to happen in this part of the book and the characters were a joy to work with.  This is where the torc took shape and it features throughout the remainder of the book.

The Belgae people were a group of Gallo-Germanic tribes who lived in Gaul from at least the 3rd century BC.  They were later found in Britain and I chose to put them in what would eventually become Somerset.  The Belgae gave their name to the Roman province of Gallia Belgia, which evolved into the modern country of Belgium.

I enjoyed writing the Iron Age section and many readers have asked me if I intend to write more stories set in this period.  Maybe I shall but at the moment I have many other projects pending.  I have the Torc Trilogy to complete and also I’m planning a series of books that follow on from ‘The Witness’.
Part 2 is set in modern day England and Ireland.  At this stage my head was filling up with ideas and a story was beginning to take shape.  Principle characters were turning up and this helped me to develop the plot.  It’s strange how even though you might think you are in control and have a very rigid storyline in mind, the characters take on a life of their own and suddenly everything changes.  I was constantly researching things that I knew nothing about in order to understand my characters and try to work out how to get them out of situations.

When I began writing about Orlagh, I had a pretty good picture of her in my head.  I knew she had a thick head of flame red hair and her eyes were a beautiful shade of green, but I deliberately refrained from describing her in detail.  When I read a book I prefer to make up my own mind about what characters look like and I often ignore detailed descriptions, so bearing that in mind I like to be economic with my own descriptions.
At first I didn’t have a name for Orlagh, but being Irish she needed a suitably Irish name.   One day I was listening to the band the Corrs, and during the chorus of one of their songs they sing ‘all again’ repeatedly.  Their Irish accents made the words sound like Orlagh Gairne and it was then I realised that I had a splendid name for my main character.

Secondary characters popped up naturally and although I allowed the plot to flow I often found myself having to pull it back on track.  It’s amazing where your characters will lead you given half a chance.

I have always been interested in history so weaving intrigue with factual references came easily as my research revealed a multitude of interesting facts.  I did my best to maintain a mystical element throughout the story with the druids and the Phoenix Legion.  The Second World War element fitted in nicely with the German drive to produce a Master Race and eventual world domination.  This is another element of the story that prevails throughout the trilogy.
I didn’t set out to write a trilogy.  At first ‘The Belgae Torc’ was going to be a single novel, but as time went on ideas began to develop and it seemed a shame to stop.  There are some very strong characters in the book and I thought it would be a good idea to develop them whilst continuing the theme.  Books two and three will be linked more closely so they will need to be read in order.

Introduction to the word ‘Celt’

The word ‘Celt’ comes from the Greek word Keltoi and seems to have been a convenient label used by the Victorians to describe Bronze and Iron Age people.
These ancient people would not have heard of the word so would certainly not have referred to themselves as being Celtic. 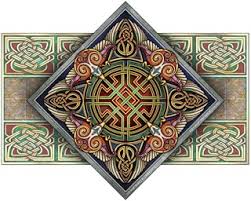 The Belgae were an ancient tribe situated in Somerset in the south of England.  I chose to use this location in my novel, The Belgae Torc, as the place where Sir Geoffrey Knowles discovered the torc in the 1920’s.
The Belgae were also established in Europe in the area that is now known as Belgium.


Early development of the book

I wanted to use this period in history as a starting point in The Belgae Torc.  The moment I came up with the idea of a golden torc, I realised that I would have to do some research and include a chapter or two from this period at the introduction stage of the book.  Little did I realise that it would develop into something more than simply a couple of chapters in fact, it remained a focus throughout all three novels.

Life in the Iron Age

These people were very highly developed, their farming methods were becoming established, they lived in communities feeding off each other’s strengths and skills, but they still had to protect themselves from attack.  The Romans had not yet arrived in my book, but fighting and raiding amongst tribes was frequent.
I had my village surrounded by a simple ditch and palisade made of timber which had to be maintained and re-enforced when an attack was expected. 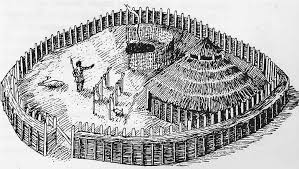 ​Roundhouses made from wattle and daub panels fixed to wooden frames made for a weatherproof structure which was roofed by thatch made from grasses gathered locally.  A hole to allow smoke to escape from central fireplaces was incorporated into the design.  When researching I discovered that in very dry conditions, fire was always a hazard from unattended cooking fires.  I used this in the book; a roundhouse suffered damage during a ‘boozy’ celebration. 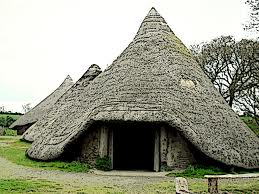 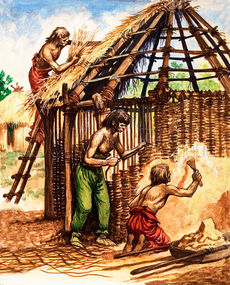 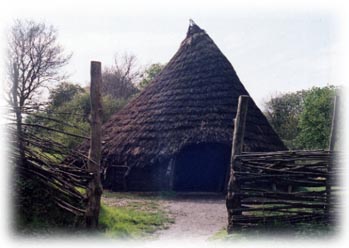 One of the larger houses that was probably too old and dilapidated to be used as a dwelling was turned into a forge where basic metalwork was carried out.  It was here that the Belgae Torc was made. 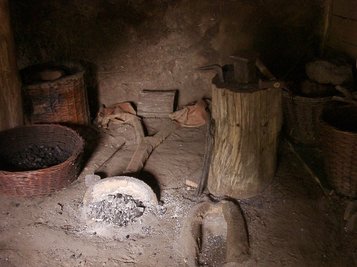 My characters painted their bodies and decorated their hair as described in the book, but also the rough woollen clothes were highlighted.  A kind of tartan was woven on frames and made into trousers for the men and dresses for the women.  This coarse wool was hard wearing and kept out the chill of the winter months. 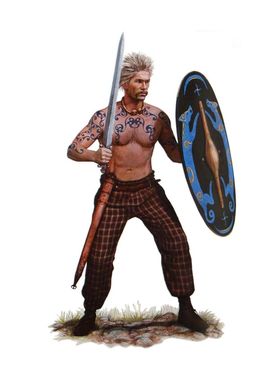 The men preferred to go into battle bare-chested or naked, displaying the swirling and colourful tattoos that were popular at the time.  The Roman’s would eventually find this practice of skin decorating and naked combat barbaric and heathen. 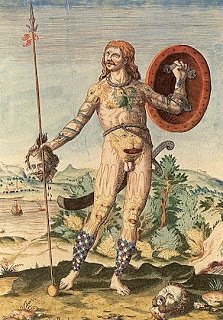 I enjoyed writing about this period in history.  Although it was very brief, about 10% of book one, it provides a sound foundation from which the rest of the story was developed.
Powered by